To promote and protect public health and safety, the Village of Bourbonnais Administration and Public Works lobbies are temporarily closed until further notice. Services are available online or by calling 815-937-3570 during business hours. Credit card processing fees will be waived for the next 60 days (effective 3.20.20).

PD Honors Officer of the Year 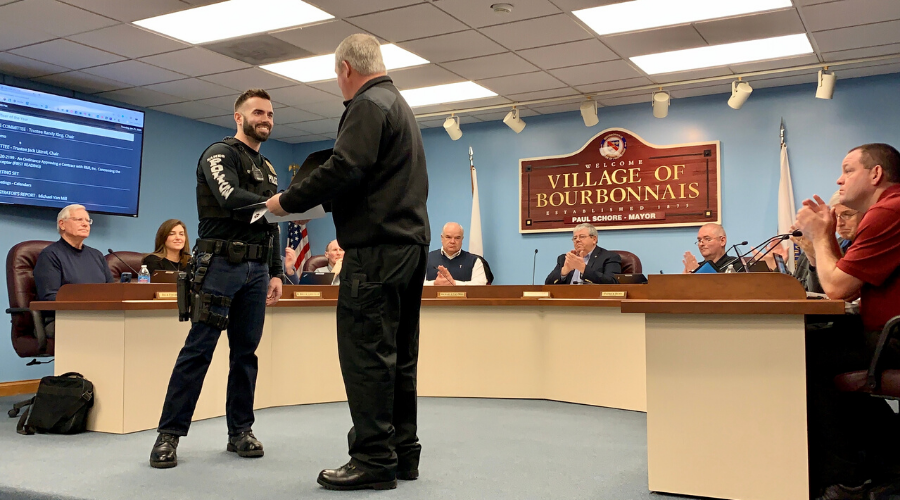 Bourbonnais, IL - The Bourbonnais Police Department proudly announces the 2019 'Officer of the Year' award and congratulates Dave Herberger for his outstanding service and selfless
dedication to the community. He was presented with a certificate by Chief of Police, James Phelps, at the Village of Bourbonnais Board Meeting Tuesday, January 21, 2020.

Patrolman Dave Herberger joined the Bourbonnais Police Department in December 2011. He currently serves the Village of Bourbonnais and Kankakee County as a KAMEG (Kankakee Area Metropolitan Enforcement Group) Agent. Along with his canine partner, Patrolman Herberger has been involved in every major drug case within the county and surrounding areas over the past year. He remains committed to the community through participation in numerous activities, events and educating future generations at local schools.

“Patrolman Herberger’s dedication to our community is commendable,” expressed Chief Phelps. “He serves countless hours ensuring the safety of our residents and continues to uphold and promote the mission of the Bourbonnais Police Department through his role with KAMEG. His actions throughout the year have made a positive impact on our community.”

Patrolman Herberger will conclude his KAMEG assignment in March 2020 when he will return to the Village of Bourbonnais ranks. The former 'Officer of the Year' award was received by Deputy Chief, David Anderson, in 2017. In 2018, recognitions were received for Officer of the Month.

The Bourbonnais Police Department is currently comprised of 26 officers serving 19,485 residents, according to a recent U.S. Census Bureau estimate.